15cBOOKTRADE: An Evidence-based Assessment and Visualization of the Distribution, Sale, and Reception of Books in the Renaissance

Partner organizations (inside or outside Oxford): 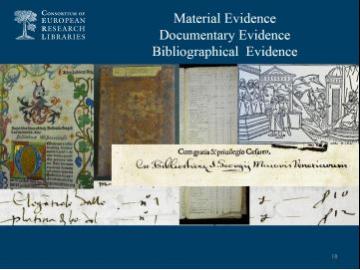 The idea that underpins the project is to use the material evidence from thousands of surviving books, as well as unique documentary evidence - the unpublished ledger of a Venetian bookseller in the 1480s - to address five fundamental objectives relating to the introduction of printing in the West which have so far eluded scholarship, partly because of lack of evidence, partly because of the lack of effective tools to deal with existing evidence.

These five objectives are:

1. Distribution, Use, and Reading Practices The book trade differs from other trades operating in the medieval and early modern periods in that the goods traded survive in considerable numbers. Not only do they survive, but many of them bear stratified evidence of their history in the form of marks of ownership, prices, manuscript annotations, binding and decoration styles. The database Material Evidence in Incunabula (MEI), conceived by Cristina Dondi, developed by Alex Jahnke of Data Conversion Group, hosted and maintained by CERL, gathers together this kind of evidence for thousands of surviving 15th-c. printed books. For the first time, this makes it possible to track the circulation of books, their trade routes, national and international, and later collecting, across Europe and the USA, and throughout the centuries. The project will enable a significant expansion and enhancement of the database Material Evidence in Incunabula, by harvesting thousands of records presently scattered in hundreds of different libraries' OPACs.

2. Books' contemporary market value Groundbreaking new evidence for the history of the book trade in the 15th century is coming from the in-depth study of the manuscript Zornale or day-book of Francesco de Madiis. It records the daily activity and sales of a Venetian bookshop from May 1484 to January 1488, as well as the inventory of the stock-in-trade for just over one year, to June 1485. In this period 11,100 entries with their prices are registered, involving 6,950 sales, sometimes gifts or barters, and over 25,000 copies. The detailed study of this exceptional document will finally bring to the attention of scholarship the economic aspects related to the introduction of printing in the West.

3. The transmission and dissemination of the texts they contain The project will enable the creation of the new database TEXT-INC, to research the corpus of all texts printed in the 15th century, modelled on the Bodleian's Catalogue of Incunabula (Bod-inc). It will also further the enhancement of the Incunabula Short Title Catalogue (ISTC) with the introduction of new research coordinates: lay/religious and subject categories applied to titles, time periods (Classical, Medieval, Humanist, Contemporary) applied to authors and anonymous works, a counter of copies.

4. The circulation and re-use of the illustrations The Project will experiment with the application of image-matching software, recently devised by the Department of Engineering Science at Oxford to detect the re-use and copying of 17th-century English Ballads held in the Bodleian Library, to 15th-century Venetian illustration.